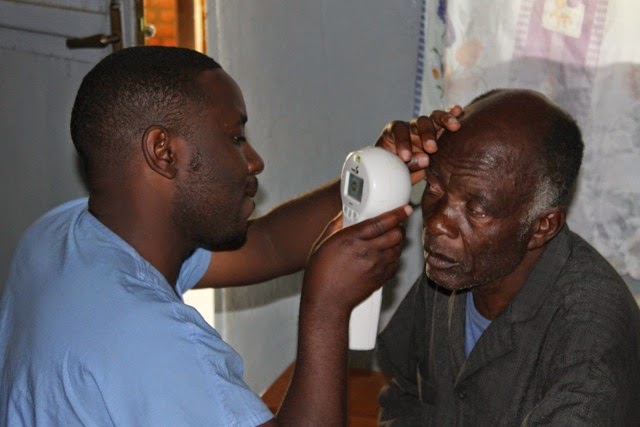 Dr. Toney with a patient at Kibuye Hospital, Burundi

We don’t need to know all the details. In its very short form, the story adds just a little more to our never-quite-complete definition of love.

As Ossian Presbyterian Church, where I preach, prepares to receive a new pastor in God’s time, we have been working to remind ourselves of what “God intends for this people, in this place, at this time.” Recent sermons have focused on Christ as our unity (Philippians 2), our call to good works (Matthew 5), the Great Commandment (Mark 12), the Great Commission (Matthew 28), and, a Sunday ago, what we called the Great Conspiracy (Acts 1). The Great Conspiracy is our Spirit-empowered witness in Jerusalem, Judea and Samaria, and to the ends of the earth.

That’s just the backdrop to the very short story.

As we talked about being Christ’s witness to the ends of the earth, I shared a video that some of you have seen before. If you don’t remember or never heard the story of Fides and how God used our friend Dr. John Cropsey’s skill to restore her sight, here it is and well worth the six minutes you will invest in watching it.

As John says in the video, blindness is a death sentence in Africa. 75% of all blindness in Africa is totally reversible, we are told.  Cataracts, which strike the young and the old, are the primary cause of blindness.  A fifteen-minute procedure transforms a person’s life.

John’s purpose in Africa, though, is more than being one ophthalmologist for ten million people.  His passion has been to train African doctors who can minister to their people and in their countries.

The first Burundian ophthalmologist to be trained at Kibuye is Dr. Toney Van Mugisha, who now works just south of Burundi in the Democratic Republic of the Congo and is based in Kalemie, on the shore of Lake Tanganyika, Tanganyika Province in the DRC.

John saw Dr. Toney at a medical conference in Malawi earlier this month.  As they caught up with each other’s lives, Dr. Toney told John that he often ventures into the interior of the DRC, sometime as far as the Congo River – and there he sets up “cataract camps” where people without hope can come to have their sight restored and their lives transformed.  In the past year alone, over 500 people have been made to see again because of Dr. Toney’s work.

One man whose mother had been blinded by cataracts for many years, carried his mother on his bike as he rode for twelve days so that she could be treated by Dr. Toney.  Once blind, now she sees.

That’s the story.  We don’t need to know anything else. God at work to the end of the earth and a son’s love for his mother.  Such love.  Such amazing grace.

Oh, there’s one more thing: John, who is now working in Rwanda, wrote, “We are helping support his outreach, so if anyone wants to support his programs, just let me know!”

You can use the contact form from the top navigation bar to let me know you would like to learn more. Wouldn’t it be great if this little band of blog readers became a part of a great conspiracy!