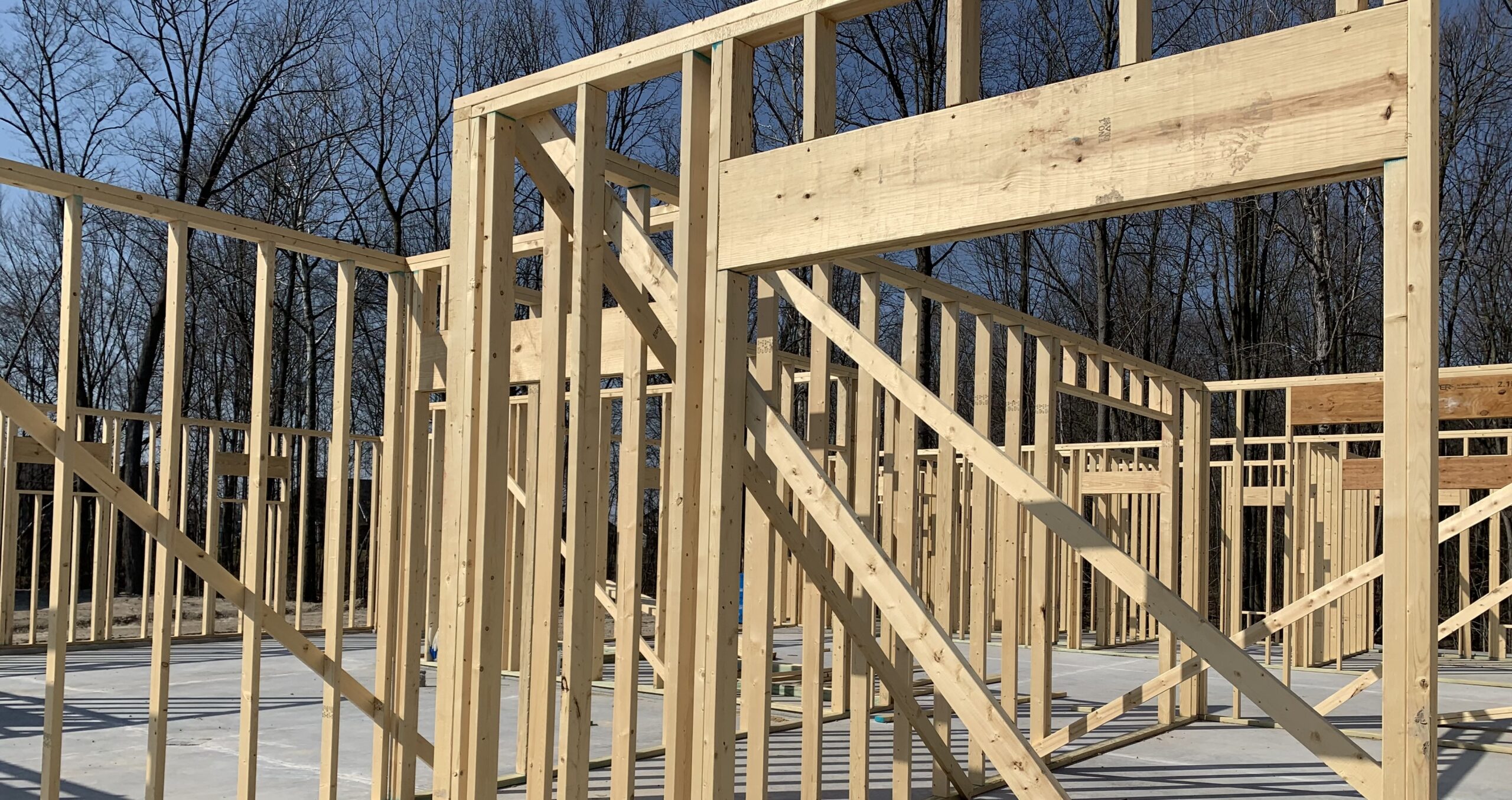 They are building new houses all over our neighborhood. Across the street, next door, around the corner in the newest section of the development. Becky and I are active spectators of the sport.  Slab or basement, I’m pretty good at figuring out whether it will be a two-story or single-story house (two-story houses tend to have a smaller footprint). Once the framing is up, we like to walk through the soon-to-be spaces imagining what they will be – master bedroom or living area, den or dining room. And, yes, as construction continues, we can be quite the critics. We would not have chosen that color and that architectural detail is more doodad than not.

The building process always begins with some basic site work and then the forms, footings, and foundation.  Slab or basement, once the foundation is poured, the work stops for a while.  Framing cannot begin until the concrete is cured, and curing takes two weeks or more.  You must have a firm foundation in order to build a trustworthy house.

That’s where Hunter Biden comes in.

After decades of drug abuse, the president’s son went to rehab (frankly, again) and has been clean for maybe nine months or so following a family intervention at some point during the 2020 general election campaign. Good for him. Really good. May he find the strength and encouragement he needs to beat the demon.

Hunter Biden has told the story of his addiction, apparently in all its dramatic detail, in a recently published memoir, Beautiful Things. I have not read the book, and do not intend to, so my response is based on several reviews, glowing and not so glowing, along with clips from the book tour interviews that are popping up here and there.

Not having read the book, I have no argument with its content. But I am worried about its timing. I wish Hunter had waited a little longer to tell his story. I wish he could give us a better sense that something is different this time.

One of the keys to the success of the Twelve-Step program is the sponsor, a longer-term member of the group, assigned a newcomer. The sponsor is something of a mentor, coach, and accountability partner. Understanding sobriety and its challenges helps make an effective sponsor. The length of one’s sobriety is not the only factor in determining if one might be a good sponsor, but it is an important factor. It is unlikely that his Twelve-Step group would ask Hunter Biden to serve as a sponsor for a newly recovering addict – not yet.

The foundation of Hunter Biden’s life of sobriety is not yet cured.

Jesus knew about the need to test foundations. It is when the rain falls, the floods rise, and winds blow, that you know whether the foundation was wisely laid or not.

The church has too often built ministries on foundations that are not ready to bear the burden of giving authentic witness to the Gospel. Local churches rush new converts into telling the stories of having been born again, the more dramatic the details the better the testimony. Or succumbing to our own media obsession in our media obsessed culture, Christians love the stories of celebrity converts whose faith may not yet have been tested (1 Peter 1:6-7). How disappointed we are when the conversion proves to be more confusion than transformation.

Once the foundation for a new house in the neighborhood is cured, it takes five months or so until the house is completed and the new neighbors to move in.  If the foundation has been well-laid, the owners will never think about it again.

Friends in recovery say that unlike a new house, sobriety is never something to be considered as having been completed.  It is a process, a life-long journey. You think about it all the time.

The Christian life, too, is more journey than destination, though we know where we’re bound when this life is over. In the meantime, the rain falls, the floods rise, and the winds blow. Sometimes after a storm, you must repair the foundation on which you have been building lest the house falls, and great is the fall of it.

I wish Hunter Biden well as he does the hard work of recovery.  As for me, rains still fall, floods still rise, winds still blow. I have some foundation work of my own to do – learning to be more diligent in prayer, more attentive to scripture, more focused in worship, more consistent serving, more loving in relationships.

Watching the Friday morning chapel service from Hunting Park Christian Academy in Philadelphia has become a helpful habit during this year of the pandemic.

Raising a child in the Hunting Park neighborhood of North Philadelphia can be difficult. For more than twenty years, HPCA has offered “an affordable, quality, Christian education that celebrates a diverse community and leads children to know and serve the Lord” to the Hunting Park community. Getting to know HPCA and its work and some of its people was a great joy for Becky and me during our time in the Philadelphia area.

Pre-covid, I might make it to an HPCA chapel service once or twice a year. I would leave thinking I ought to go more often, and then I never did.

HPCA quickly and amazingly adopted a virtual education strategy last spring at the beginning of the pandemic and has been using a creative hybrid model for its classes throughout this academic year.  Only half the students are in the building on any given day, so chapel has remained a virtual event which is particularly good for people who live 600 miles away. END_OF_DOCUMENT_TOKEN_TO_BE_REPLACED 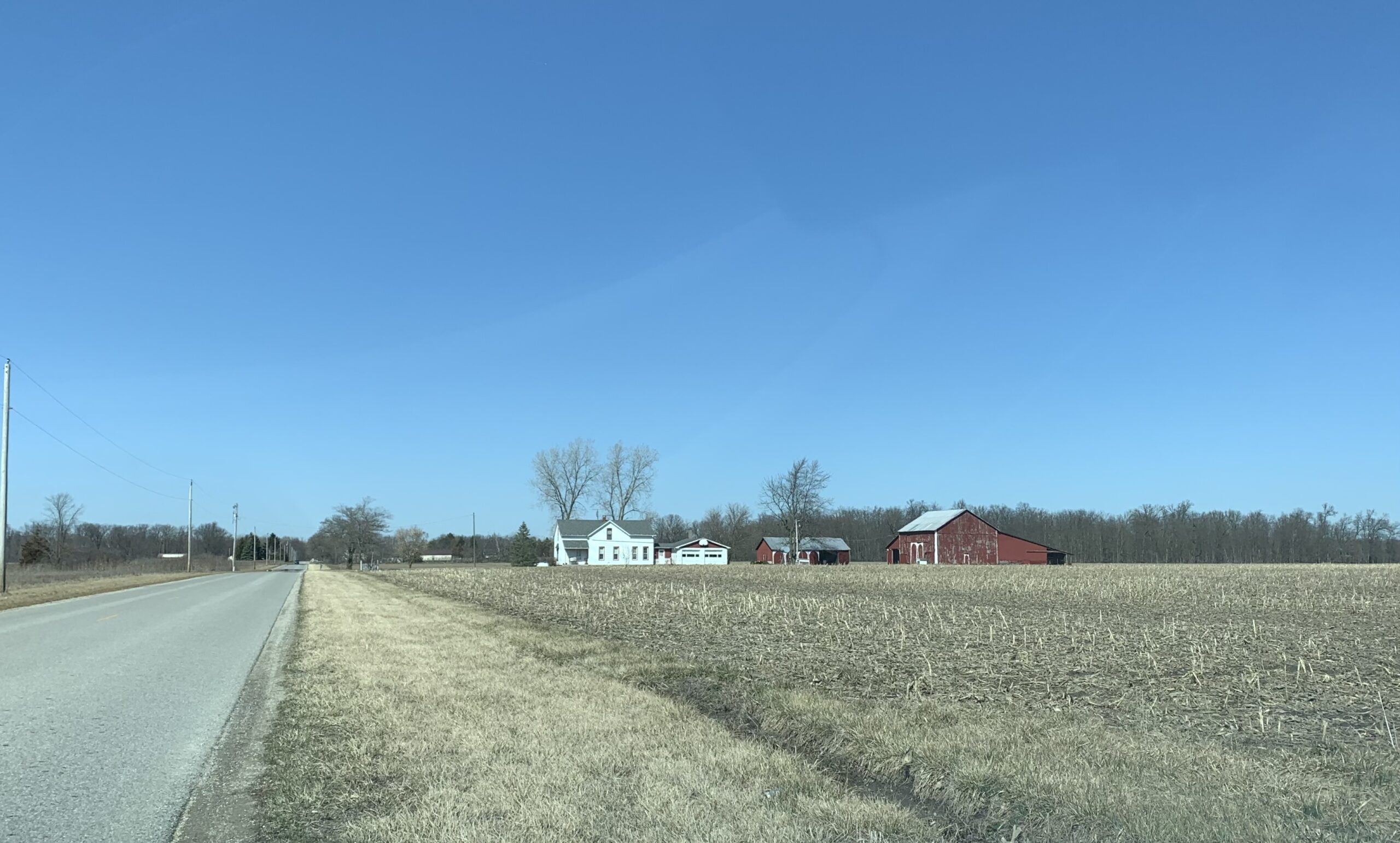 With apologies to Robert Frost,
Two routes diverged on Google Maps, and I—
I took the one less traveled by.

I attended a presbytery-sponsored workshop Saturday, and it was well-worth the 85-mile drive to get there. I had not been to the church in northwest Ohio where the workshop was held, so I asked Google Maps to show me the way. Instead of the closest 85-mile route, however, Google recommended a 101-mile route that would save ten minutes of travel time. Once I hit I-469 north of Fort Wayne, my journey would be mostly by interstate or four-lane highway. 70 MPH.

Two routes diverged on Google Maps, and I— I took the one less traveled by. County roads and state highways, I never saw four lanes, and the best I could do was 55 MPH. Or so. But I had to slow down as I drove through Hicksville and Ottawa, Ohio, pretty little towns. Mostly, though, my road less travelled took me through farm country.  White framed farmhouses, red painted barns, and tall silos. And fields, mile after mile of fields. Some of the fields were still littered with the dry remains of last year’s corn crop, others were freshly plowed, and a few of them shimmered green in the early spring sunshine – a new crop, soybeans maybe? END_OF_DOCUMENT_TOKEN_TO_BE_REPLACED 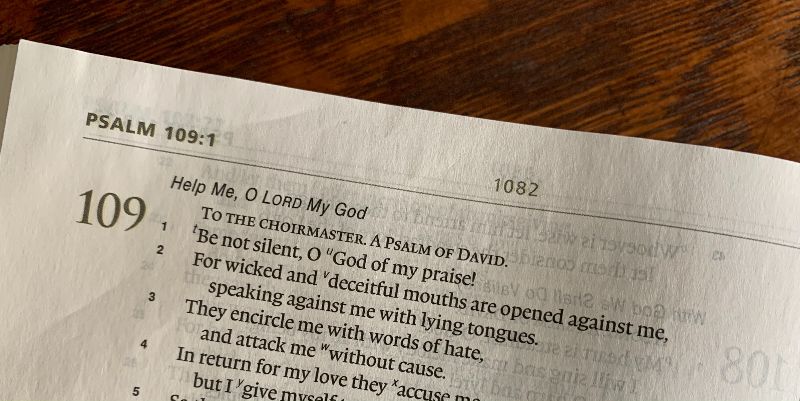 Given my wandering mind and my frequent failure to focus, I find a form of praying the Psalms helpful in keeping my prayers from being hopelessly scattered or unnecessarily shallow. My list of long-term prayer concerns is intentionally short, fewer than a dozen people and their situations for which I pray day by day.  Remember, I have a wandering mind and am prone to frequent failure to focus.

I use the Daily Office of the Book of Common Prayer (it can  be found online at Bible Gateway and other sites).  The Daily Office offers readings from the Psalter for morning and evening.  I tend to use both in the morning.  So, two or more Psalms per day.  You go through the entire Psalter in about seven weeks.  Not completely random, there seems to be some logic to the ordering of the readings, but I have never fully figured it out.

Among those for whom I pray, difficult situations have recently risen.  Some of those situations have to do with serious health issues, some have to do with evil seeping through the cracks of a loved-one’s life.  Another has to do with the difficult consequences of a tough decision well made.  The band of friends for whom I pray, unknown to one another, is going through hard times. END_OF_DOCUMENT_TOKEN_TO_BE_REPLACED 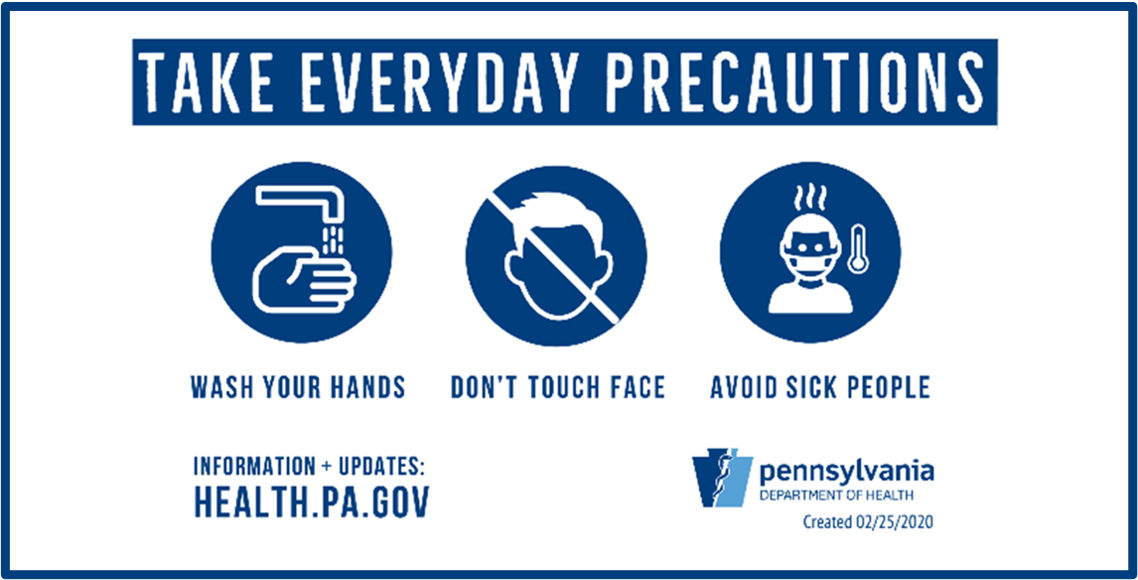 Like many people, I have been thinking of the year-ago week that seems so long ago. This past Monday, March 8, marked a full year since I preached from the pulpit at Langhorne Presbyterian Church. I had already announced my July 1 retirement.  Who could have known as we locked the doors after the second service, that March 8, not June 28, would not only be my final Sunday in the pulpit from which I had preached for over twelve years, but also the last time I’d see many members of our congregation.

We did not know many things that second full week of March, 2020. Who could have known?  Dr. Anthony Fauci appeared on 60 Minutes March 8, and told us, “There’s no reason to be walking around with a mask.”  On Tuesday, March 10, New York Mayor DeBlasio said, “I don’t want to see Broadway go dark if we can avoid it. I want to see if we can strike some kind of balance.” On Thursday, the NBA canceled the remainder of its season and on Friday the NCAA canceled the rest of March madness. No governor had yet issued a stay-at-home order, but news began to spread about school districts canceling classes – but just for a week or two.

What a crazy week, and in recalling it, no fault or blame is implied. It was a crazy week. END_OF_DOCUMENT_TOKEN_TO_BE_REPLACED