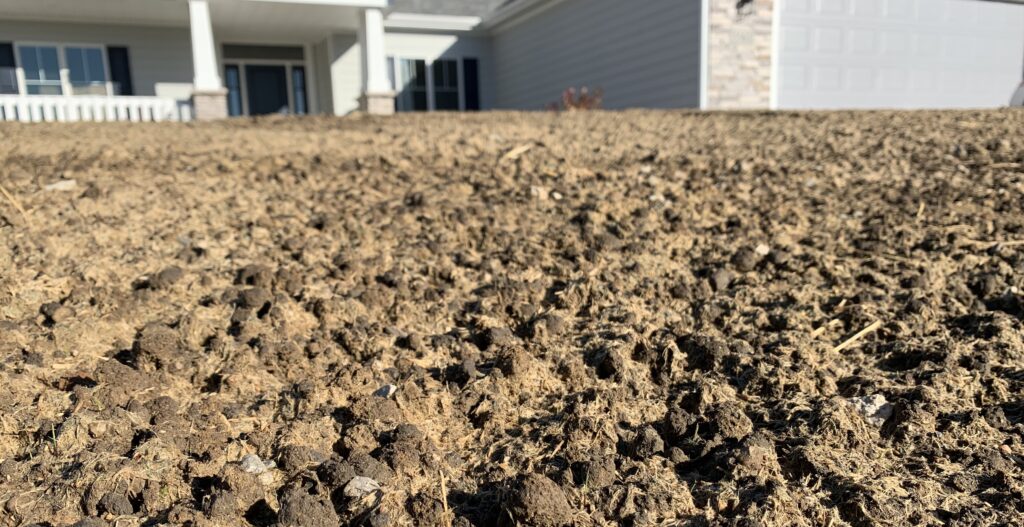 Planting the lawn was the last big project at the new house, though we have a thousand little projects yet to complete. The seed was sown, actually sprayed, last week.  Now we’re babysitting what we hope will be a lush carpet of green by next spring.  They say not too much and not too little water.  Gentle autumn rains have fallen two days since the seed was sown, and we join the just and the unjust in giving thanks.  Now the forecast is for dry and warmer weather. The seeds will like the warmth, but the drier weather means hauling hoses and sprinklers around the yard for the better part of the day.

But mostly we wait. Every time I go outside, I peer intently at the well-groomed and properly moist soil hoping to see the first blades of grass. We should see the early shoots any day now.  The hydroseed people have already warned us, though; some of those verdant sprouts will not be the grass we are waiting to welcome but the weeds we dread.  Okay, it’s the wrong time of year, but did you know that a single dandelion plant is capable of producing 15,000 dandelion seeds?  Not to worry, they tell us, we’ll take care of the weeds in due time.  In the meantime, the weeds will grow, and we’re not to pull them, in any other way molest them, or allow ourselves to become overly anxious.  Let them be.

It’s going to be a tough few weeks.

Though archaeologists have found little evidence of hydroseeding in First Century Galilee, Jesus knew all about my anxiety.

Jesus told a story about a landowner who sowed some good seed in his field only to have a nasty neighbor scatter some weed seeds among the good seeds. Don’t worry, our neighbors would never do such a thing.  Point is, the good seed and the bad begin to grow together. The landowner’s servants decide to organize a weed-pulling party, but the landowner tells them to relax, “lest in gathering the weeds you root up the wheat along with them. Let both grow together until the harvest, and at harvest time I will tell the reapers, ‘Gather the weeds first and bind them in bundles to be burned, but gather the wheat into my barn.’”

In telling the story Jesus said the Kingdom of heaven might be compared with it.

The literalist in me is comforted by the story. I must remember it during the next few weeks when I am tempted to gather the weeds out of our new-growing lawn.  “Let them both grow,” the Scripture will tell me. Not the flames of the bonfire, but some sort of weed ‘n’ feed will take the weeds down in time.

In another story about the Kingdom Jesus tells me to be patient as I wait for our new lawn. Once again a landowner has planted some seed, Jesus says. Then, “He sleeps and rises night and day, and the seed sprouts and grows; he knows not how. The earth produces by itself, first the blade, then the ear, then the full grain in the ear.”

Jesus wants me to think about the Kingdom of heaven next time I’m out peering at the soil in the front yard.  He wants me to faithfully sow the seeds of the gospel in what I say and what I do and to be patient for their growing. He wants me to leave the weeds – those non-Kingdom things we see sprouting up all around – to him.  Oh, Jesus is going to tell stories about binding up the wounds of those left to die at the side of the Jericho Road and welcoming wayward children home; we have much to do, but he also says, “Relax, I’m going to sort it out at the end.”

I think I’ll go check on the lawn.

I’m preaching at Saint Andrew EPC this coming Sunday.  If you’re interested, you can catch the live feed at 10:15 or the recording afterwards.  https://www.facebook.com/StAndrewEPC

And in the spirit of the season and the post: