In this past Friday’s post I suggested Abraham Lincoln’s 1863 Thanksgiving Day Proclamation and Edward Winslow’s letter from Plymouth Plantation (December 1621) as critical to our understanding of the nation’s Thanksgiving Day traditions.  Enjoy the read.

By the President of the United States of America.

The year that is drawing towards its close, has been filled with the blessings of fruitful fields and healthful skies. To these bounties, which are so constantly enjoyed that we are prone to forget the source from which they come, others have been added, which are of so extraordinary a nature, that they cannot fail to penetrate and soften even the heart which is habitually insensible to the ever watchful providence of Almighty God.

In the midst of a civil war of unequalled magnitude and severity, which has sometimes seemed to foreign States to invite and to provoke their aggression, peace has been preserved with all nations, order has been maintained, the laws have been respected and obeyed, and harmony has prevailed everywhere except in the theatre of military conflict; while that theatre has been greatly contracted by the advancing armies and navies of the Union.

Needful diversions of wealth and of strength from the fields of peaceful industry to the national defence, have not arrested the plough, the shuttle or the ship; the axe has enlarged the borders of our settlements, and the mines, as well of iron and coal as of the precious metals, have yielded even more abundantly than heretofore. Population has steadily increased, notwithstanding the waste that has been made in the camp, the siege and the battle-field; and the country, rejoicing in the consciousness of augmented strength and vigor, is permitted to expect continuance of years with large increase of freedom.

No human counsel hath devised nor hath any mortal hand worked out these great things. They are the gracious gifts of the Most High God, who, while dealing with us in anger for our sins, hath nevertheless remembered mercy.

It has seemed to me fit and proper that they should be solemnly, reverently and gratefully acknowledged as with one heart and one voice by the whole American People. I do therefore invite my fellow citizens in every part of the United States, and also those who are at sea and those who are sojourning in foreign lands, to set apart and observe the last Thursday of November next, as a day of Thanksgiving and Praise to our beneficent Father who dwelleth in the Heavens. And I recommend to them that while offering up the ascriptions justly due to Him for such singular deliverances and blessings, they do also, with humble penitence for our national perverseness and disobedience, commend to His tender care all those who have become widows, orphans, mourners or sufferers in the lamentable civil strife in which we are unavoidably engaged, and fervently implore the interposition of the Almighty Hand to heal the wounds of the nation and to restore it as soon as may be consistent with the Divine purposes to the full enjoyment of peace, harmony, tranquillity and Union.

In testimony whereof, I have hereunto set my hand and caused the Seal of the United States to be affixed.

Done at the City of Washington, this Third day of October, in the year of our Lord one thousand eight hundred and sixty-three, and of the Independence of the United States the Eighty-eighth.

By the President: Abraham Lincoln 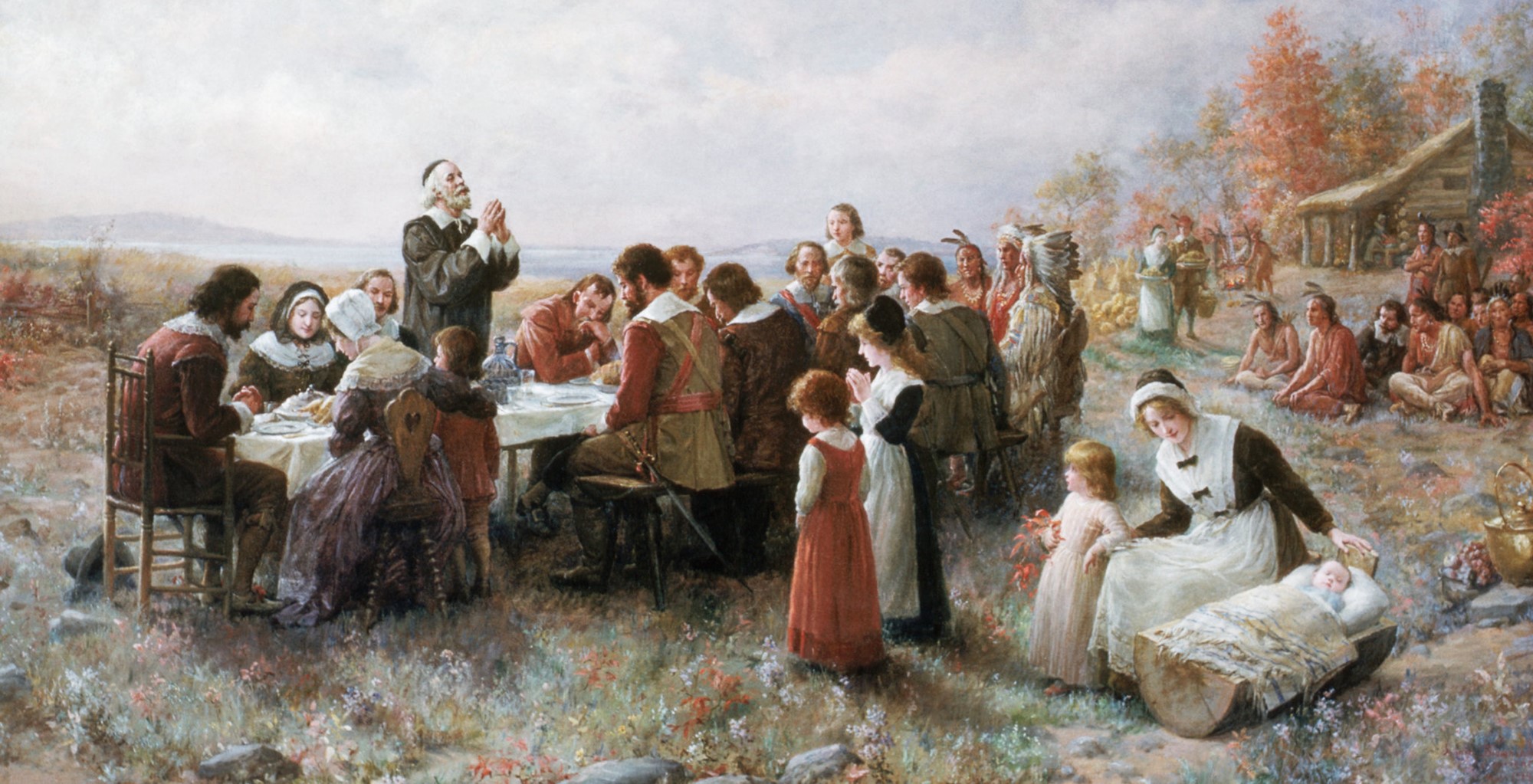 From a Letter to a Friend –

Our corn did prove well, and God be praised, we had a good increase of Indian corn, and our barley indifferent good, but our peas not worth the gathering, for we feared they were too late sown, they came up very well, and blossomed, but the sun parched them in the blossom; our harvest being gotten in, our governor sent four men on fowling, that so we might after a more special manner rejoice together, after we had gathered the fruit of our labors; they four in one day killed as much fowl, as with a little help beside, served the company almost a week, at which time amongst other recreations, we exercised our arms, many of the Indians coming amongst us, and among the rest their greatest King Massasoit, with some ninety men, whom for three days we entertained and feasted, and they went out and killed five deer, which they brought to the plantation and bestowed on our governor, and upon the captain, and others.  And although it be not always so plentiful, as it was at this time with us, yet by the goodness of God, we are so far from want, that we often wish you partakers of our plenty. We have found the Indians very faithful in their covenant of peace with us; very loving and ready to pleasure us: we often go to them, and they come to us; some of us have been fifty miles by land in the country with them; the occasions and relations whereof you shall understand by our general and more full declaration of such things as are worth the noting, yea, it hath pleased God so to possess the Indians with a fear of us, and love unto us, that not only the greatest king amongst them called Massasoit, but also all the princes and peoples round about us, have either made suit unto us, or been glad of any occasion to make peace with us, so that seven of them at once have sent their messengers to us to that end, yea, an Fle at sea, which we never saw hath also together with the former yielded willingly to be under the protection, and subjects to our sovereign Lord King James, so that there is now great peace amongst the Indians themselves, which was not formerly, neither would have been but for us; and we for our parts walk as peaceably and safely in the wood, as in the highways in England, we entertain them familiarly in our houses, and they as friendly bestowing their venison on us.  They are a people without any religion, or knowledge of any God, yet very trusty, quick of apprehension, ripe-witted, just, the men and women go naked, only a skin about their middles; for the temper of the air, here it agreeth well with that in England, and if there be any difference at all, this is somewhat hotter in summer, some think it to be colder in winter, but I cannot out of experience so say; the air is very clear and not foggy, as hath been reported.  I never in my life remember a more seasonable year, than we have here enjoyed: and if we have once but kine, horses, and sheep, I make no question, but men might live as contented here as in any part of the world.  For fish and fowl, we have great abundance, fresh cod in the summer is but coarse meat with us, our bay is full of lobsters all the summer, and affordeth variety of other fish; in September we can take a hogshead of eels in a night, with small labor, and can dig them out of their beds, all the winter we have mussels and othus at our doors: oysters we have none near, but we can have them brought by the Indians when we will; all the springtime the earth sendeth forth naturally very good sallet herbs: here are grapes, white and red, and very sweet and strong also.  Strawberries, gooseberries, raspas, etc.  Plums of three sorts, with black and red, being almost as good as a damson: abundance of roses, white, red, and damask: single, but very sweet indeed; the country wanteth only industrious men to employ, for it would grieve your hearts (if as I) you had seen so many miles together by goodly rivers uninhabited, and withal to consider those parts of the world wherein you live, to be even greatly burdened with abundance of people.  These things I thought good to let you understand, being the truth of things as near as I could experimentally take knowledge of, and that you might on our behalf give God thanks who hath dealt so favorably with us.